It’s understandable why many fear this is a prelude to another big crash. 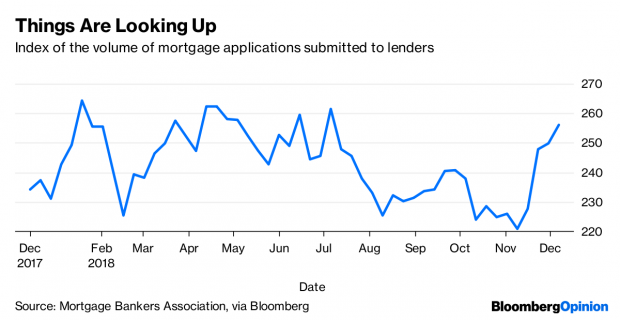 Housing market softness in the back half of 2018 has investors and the public wondering how bad things might get. It’s understandable that people would be worried, considering that the last housing downturn led to the worst economic crisis since the Great Depression. But housing market fundamentals in this cycle are nowhere near as risky as they were in the mid-2000s. Real-time data on mortgage applications suggest a milder path. Coincidentally, it looks a lot like 1994.

The economy in 1994 is remembered largely for financial market turmoil brought about by sharp increases in the federal funds rate by the Federal Reserve. During that year, the Fed increased its target rate for lending between financial institutions to 5.5% from 3%, a 2.5% increase in one calendar year. Perhaps not surprisingly, mortgage rates increased sharply as well. The average 30-year fixed mortgage rate increased by around 2 percentage points in 1994, ending the year north of 9%. New home sales slumped. In December 1993, the seasonally adjusted annual rate of new single-family-home sales was 812,000. A year later, in December 1994, it had fallen over 20% to 629,000.

The other noteworthy story of the 1994 economy was what happened to the yield curve. Because of the sharp increase in short-term interest rates, the yield curve flattened significantly. The spread between two-year and 10-year Treasury rates at the end of 1993 was 1.58%. By the end of 1994 the spread was at 0.15% — close to zero, but not quite inverted.