NCUA data for the second quarter showed the usual disparity in income between large and small credit unions, but it also showed that each broad group is near or surpassing results from before the COVID-19 pandemic.

Net income annualized as a percent of average assets for the three months ending June 30 was a record 1.16%. Callahan & Associates, which has data going back to 2002, showed higher quarterly ROA only twice: 1.97% in 2009’s second quarter as the Great Recession was ending, and in the second quarter of 2002.

ROA improved among all size classes. Credit unions with more than $1 billion exceeded their 2019 peaks, while those with less neared their pre-pandemic peaks. 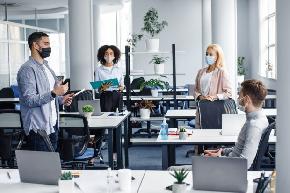 Leaders of Signal Financial FCU and the Credit Union of Texas share why and how they created vaccine mandates for their CUs.

After 22 Years, DeTuncq to Retire From UVA Community Credit Union

Alison DeTuncq says she will step down from her leadership position next year.