U.S. Home Prices Climbing at a Rate Not Seen Since the 2006 Boom

Six years into the housing recovery, prices are still climbing, largely thanks to an inventory shortage. 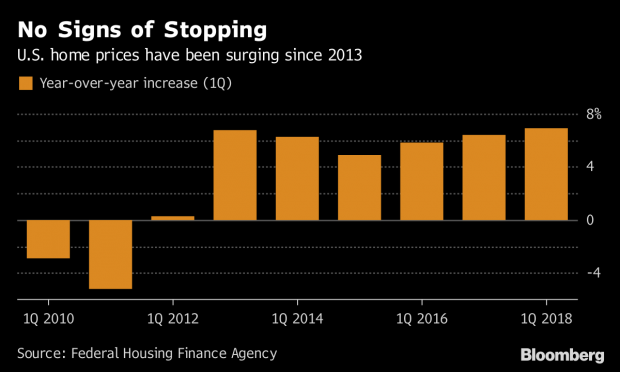 Single-family home prices rose 6.9% from the first quarter of 2017, according to data released Thursday by the Federal Housing Finance Agency. That’s the most for the start of a year since 2006 — when the gain was over 9.1% — and the highest for any quarter since 2013.

Six years into the housing recovery, prices are still climbing, largely thanks to an inventory shortage. At the same time, demand is rising along with confidence in the economy, pushing buyers into bidding wars across the country. Expect supplies to stay tight: Builders haven’t increased production enough since last decade’s property crash and more seniors are choosing to remain in their houses rather than downsize.