TUCSON, Ariz.-CUES has announced the top honor Golden Mirror Award winners during the Nexus Conference held here at the Hilton Tucson El Conquistadore Golf & Tennis Resort. Walking away with the GMA Phil Davies Memorial “Best of Show” were Chad Hunter, marketing vice president and Michael Duffy, CEO, Financial Center Credit Union, Stockton, Calif. Taking home the GMA Rookie of the Year honor was Jenny Laudadio, marketing director, United Heritage Credit Union, Austin, Texas. The GMA Golden Shoestring award was presented to Dana Tell, marketing vice president, Team One Credit Union, Saginaw, Mich. The prestigious GMA “Best of Show” honor is awarded each year to one of the first-place winners from the four asset divisions in the coordinated campaigns category; it recognizes a single marketing effort incorporating a variety of integrated approaches. Financial Center Credit Union was honored for its successful “Monster Loan” campaign, which exceeded its marketing goal by 155% and resulted in a 3,800% return on investment. The campaign featured a wide variety of pieces-from retail displays, direct mail and advertising to eye-catching “graffiti” made with aerosol chalk and placed on the credit union’s sidewalks and parking lots-to create a truly unified effort. “What an amazing honor for our credit union!” Hunter said upon accepting the award. “I’m thrilled to be part of Financial Center’s marketing legacy. To me this award represents a holistic marketing effort by our front-line staff, behind-the-scenes staff, managers, supervisors and executives.” The GMA Rookie of the Year is selected from all first-time winning entrants. As this year’s honoree, Laudadio was responsible for developing membership kits for United Heritage CU. The new welcome packets included well-organized information designed to increase awareness in United Heritage’s overall offerings, and to educate members on the credit union’s ability to serve as a primary financial institution. The campaign exceeded its marketing goal by 18.75%. In accepting the award, Laudadio said, “This is amazing. I’ve only been with the credit union for two years, so I’m very honored.” The GMA Golden Shoestring award is bestowed upon one entry produced on a limited budget, which showcases exceptional results and outstanding creativity. Team One Credit Union’s entry was a 60-second radio spot, “Savings Singing,” designed to increase savings deposits. The ad, which was created for just over $9,000, exceeded its marketing goal by 18.4%, and resulted in a return on investment of over 200,000%. Tell said, “The marketing team of Team One Credit Union is very honored to be recognized with this great award.” This year, CUES received nearly 1,000 entries in the 32nd annual competition’s 27 categories. A panel of six judges composed of credit union marketers, past winners and other advertising professionals scored the entries. 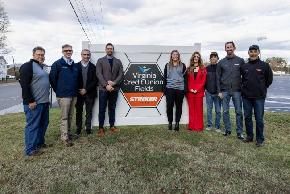