A man who is accused of robbing two credit unions left written proof that even accused criminals can at least attempt to appear polite. 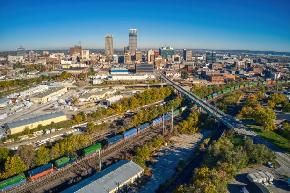