Soak the Boomers in Order to Save Capitalism

It will soon become apparent that soaking the 1% is not enough. 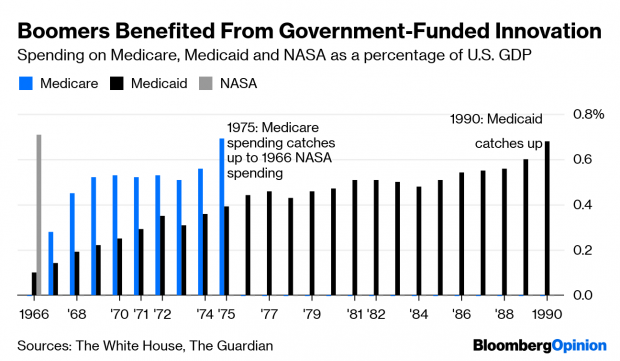 “The reason we’re having this argument over socialism and capitalism,” Pete Buttigieg explained recently, “is that capitalism has let a lot of people down.” Buttigieg, one of the Democrats’ many candidates for president, is not wrong — but this isn’t class warfare so much as intergenerational warfare. As such, there may be a way to resolve it without the economic destructiveness that often accompanies class conflict.

Some history can help explain where the tension is coming from. Well-educated, affluent baby boomers have done exceptionally well over the last 60 years. Yes, that’s due partly to prudence and hard work, but it’s also the result of luck. Over the last half century, the U.S. and global economies have undergone profound changes that have redounded to their benefit.

The first boomers were the most fortunate. They graduated from high school and college into the strongest labor market on record and an economy whose productivity was soaring due in part to a massive public investment in technology. In 1966, the federal government spent 0.7% of U.S. GDP on NASA — a level of spending that Medicare wouldn’t reach for another decade, and Medicaid wouldn’t see until the 1990s.