This Time Is Different for Yield Curve? They Said That Last Time

Inversion is “a horse with a track record we would rather not go against." 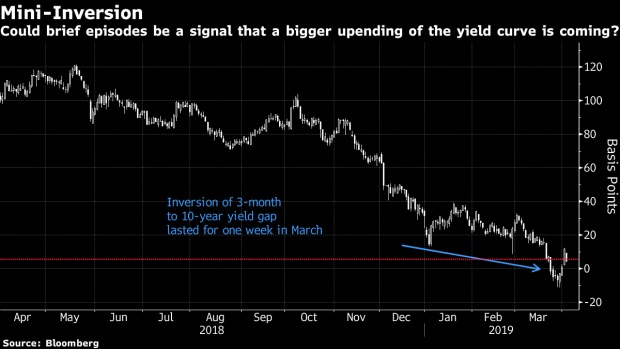 “This time is different.”

That famous line, which mutual-fund legend Sir John Templeton once called “among the four most costly words in the annals of investing,” is back in fashion these days when it comes to the Treasury yield curve. Skeptics from Goldman Sachs Group Inc. to Morgan Stanley Investment Management say the curve’s recessionary signals may be distorted now as a result of central-bank policy that’s kept interest rates exceptionally low since the financial crisis.

Is it deja vu all over again? More than a decade ago, then-Federal Reserve Chairman Ben S. Bernanke dismissed the curve’s predictive powers after two of the most widely watched yield spreads inverted and then went flat. In Bernanke’s camp were then-Treasury Secretary John W. Snow and bond king Bill Gross. And we all now what happened next. That time was famously NOT different.