An inversion would cause lenders to tighten lending standards and be “like a piling-on effect in terms of a slowdown." 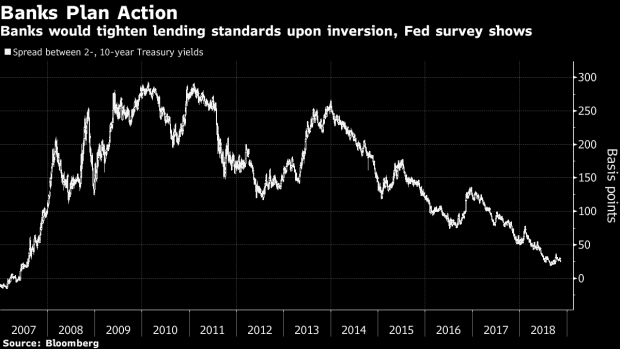 For all the questions over the outlook for the U.S. Treasury yield curve, one thing looks clear: If it inverts, banks will tighten lending standards, potentially adding headwinds to economic growth.

Federal Reserve policy makers and market participants alike have been watching this year as the gap between short- and longer-term rates has narrowed. In August, the curve from 2 to 10 years reached the flattest since 2007, in part as traders priced in Fed policy tightening. Historically, recession has followed inversions, though it’s unclear why that relationship exists.

Banks told the Fed that they would tighten lending standards if short-term rates rise above their long-term counterparts, the central bank said Tuesday in results of an October survey of senior loan officers. Asked how an inversion of the yield curve would impact lending practices, a “major share” of banks in the survey said they’d become less profitable and more risk-averse.