Housing Is Tanking in the Northeast. Guess Why? 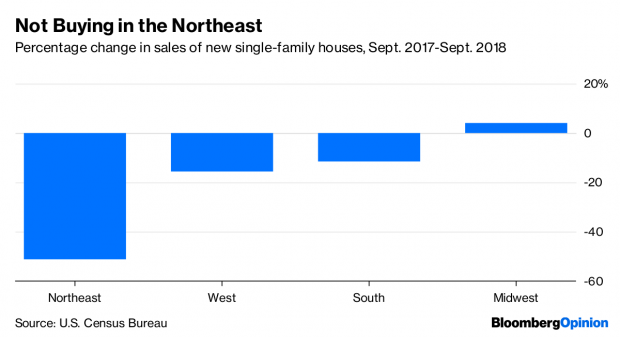 Sales of new single-family houses were down 13.2% in September from a year earlier, the Census Bureau reported Wednesday. That’s a lot — the biggest year-over-year percentage decline since April 2011, when the housing bust was still busting.

It is also within the margin of error. The Census Bureau doesn’t go out and count every home sold. It takes a sample, and it estimates that there is a 90% likelihood that actual home sales nationwide in September were somewhere between 26.8% lower than a year before and 0.4% higher. The midpoint of that range is 13.2%.

There was one region of the country, though, where home sales were definitely down by a lot. That would be the Northeast, where new home sales fell year over year at a rate somewhere between 31.2% and 71.4% (midpoint: 51.3%):