Besides the drop in used car prices, costs for new vehicles fall 0.1%, the first decline since April. 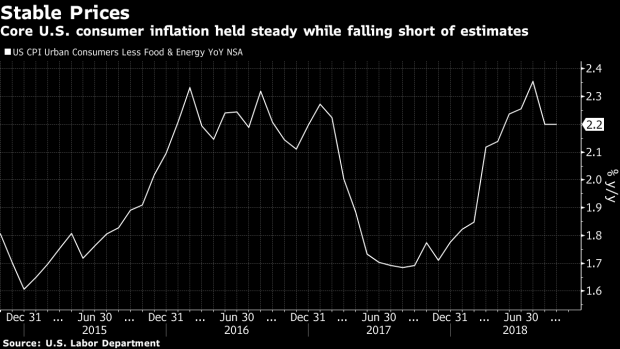 A gauge of underlying U.S. inflation was below estimates in September as used-vehicle costs fell and housing rents cooled, signaling that price gains may remain close to where Federal Reserve policy makers want them amid an outlook for continued gradual interest-rate hikes.

Excluding volatile food and energy costs, the core consumer price index rose 2.2% in September from a year earlier, the same pace as in August and less than the 2.3% median estimate of economists surveyed by Bloomberg News, a Labor Department report showed Thursday. The broader CPI slowed to a 2.3% annual gain, the least since February, compared with forecasts for 2.4%.

The moderation in core inflation partly reflects a 3% monthly decline in prices for used cars and trucks, the biggest drop in 15 years. Fed officials will have two more months of price figures in hand before their December meeting at which they’re projected to raise interest rates for a fourth time this year amid solid economic growth and consumer spending, boosted by tax cuts.

Opportunities for Loan Growth Still Exist in 2023 Despite Macroeconomic Challenges