Some said the public shaming built into the test was unhealthy. 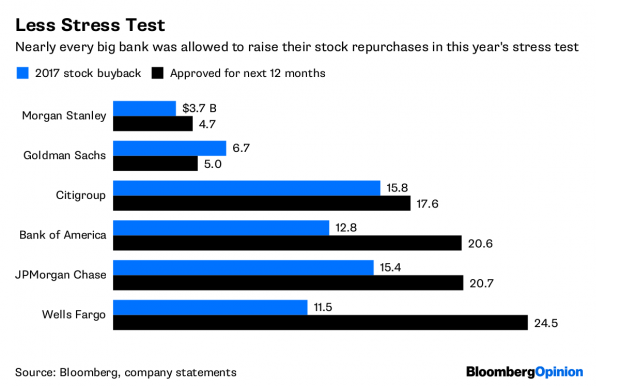 This year’s Federal Reserve stress test declared, once again, that the nation’s largest banks are strong enough to weather a severe recession without being bailed out. The big question is whether determining that is still worth it.

On Thursday, the Fed, for the fourth consecutive year, gave JPMorgan Chase & Co., Bank of America Corp. and more than two dozen large U.S. bank the go-ahead to return buckets of cash to their shareholders —  $93 billion in stock buybacks in the next year for the six largest banks, up from $66 billion last year. After doing worse than expected on the test, Goldman Sachs Group Inc. agreed to keep payouts, including dividends, in line with the average of the past two years, and Morgan Stanley maintained the level it paid in the past 12 months. Those two banks, along with State Street Corp., will have to resubmit a portion of their test later in the year for final approval.

Four other banks, including JPMorgan, had to lower their capital distribution plans after seeing the results of the first portion of test, which came out last week. But nonetheless, all the banks, with the exception of the U.S. division of troubled Deutsche Bank, which was expected to fail, can claim a clean bill of health. And on average, banks will be able to distribute 95% of their profits, the Fed said, in line with analysts’ estimates.