Higher debt levels are being fueled in large part by greater borrowing in the loan market. 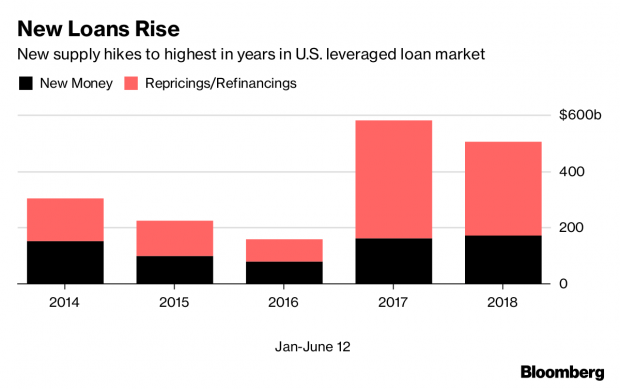 The U.S. signaled to banks that risky loans are okay. Lenders are now listening.

Goldman Sachs Group Inc. and Citigroup Inc. are among the banks that have doused companies with debt to an extent that would have been almost unthinkable a year ago, at least for a regulated bank. They’re piling loans onto corporations that are being purchased in leveraged buyouts, and when the dust settles, companies like health-care services provider Envision Healthcare Corp. could have total debt around 7.5 times a measure of earnings.

A year ago banks believed, with good reason, that regulators would view any ratio above six times as too high. Then in February of this year, government officials hinted that they were easing their enforcement of that guideline, and the entirely foreseeable came to pass. While average levels of indebtedness are only edging higher in acquisitions, leverage is jumping in the riskiest deals. Regulated banks are stepping into an area previously dominated by less-regulated foreign lenders and smaller investment banks.